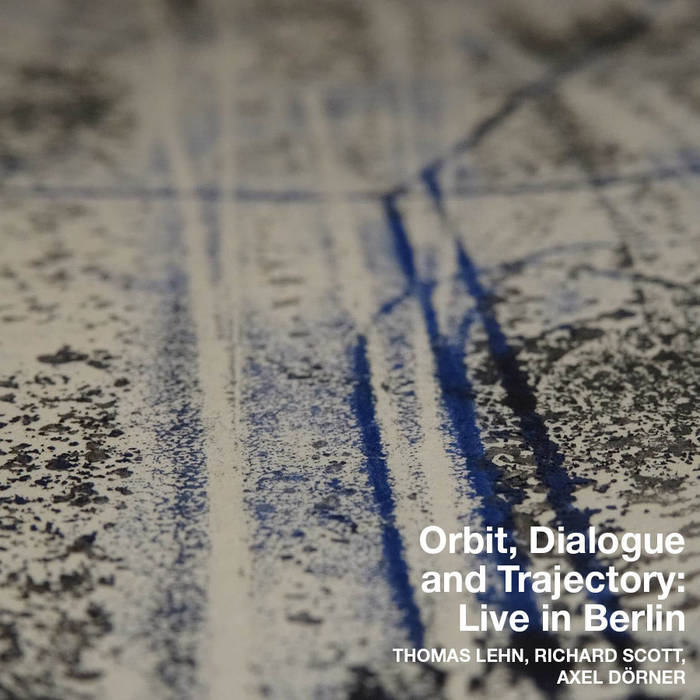 Frank Wilke This is a hallmark of excellence in electroacoustic improvisation!

Ulrich Jonas It is the meeting of three great musicians who can deal with electronics. Listen to the Scott-Lehn duo! Favorite track: Dialogue.

John Cratchley Any new outlet (Sound Anatomy) for contemporary improvised music gets my vote...Axel Dorner has been a 'must hear' for years and this set puts him in terrific company...world class improv from a very interesting musical combination (synths/trumpet)...

This album launches the Sound Anatomy imprint and captures a rare musical encounter between the remarkable trumpeter Axel Dörner in collaboration with two notable analogue synthesizer players: Thomas Lehn, who has carried the torch for the EMS Synthi analogue synth as a tool for free improvised experimentation for some 30 years, and Richard Scott, a very active presence on the Berlin modular synthesizer, electroacoustic and improvised music scenes. The combination is a natural one in which the musical division of labour is negotiated and renegotiated throughout. Lehn and Scott take a visceral and almost “acoustic” approach to their dials, wires and circuitry, while the influence of electronic music on Dörner’s own oeuvre is striking: the trumpet’s envelope shapes, low frequency oscillations and sustained, noise-laden textures seem inspired as much by musique concrete and tape music as they are by extended brass techniques.

With no little humour, the original flier for the concert (part of the long-running AUXXX series) reads: “Two men with sinister-looking suitcases full of mysterious knobs and dials meet the tweed suited man-with-the-golden-horn one Thursday night in a cellar of a tiny East Berlin cinema... What could possibly happen next??? You will have to come to find out…” And indeed we may perceive something both cinematic and subterranean in this intense, atmospheric musical underworld. Sometimes we hear the surprising emergence of groove-like rhythmic patterns and harmonic incidents which do not entirely forget melody, though these are not elements the trio choose to hang onto for long, giving a sense of continuous unfolding and making us most curious about where this collaboration will lead in the future.

THOMAS LEHN - analogue synthesizer
Since the early 1980s Thomas Lehn has been working as an author and performer of contemporary music. Parallel to his work as a pianist, since the early 1990s his most widely renowned work has been performing and producing live-electronic music. Rooted in the experience of a wide spectrum of musical fields based on his background as an interpreting and improvising pianist in classical, contemporary and jazz music, and having been involved in numerous other projects like music theatre, dance, multimedia etc, he has been developing an individual language of electronic music. The electronic equipment he uses consists of analogue synthesizers from the late 1960s, and since 1994 in particular the EMS Synthi A. Besides the substantial sound qualities of its analogue synthesis, the ability of this modular instrument to modify electronic sounds directly, as well as to combine and to control several parameters of the sound synthesis at the same time, allow him to spontaneously act in close contact with the various structural levels of the musical process.
In 2000 his solo album Feldstärken was released on German label Random Acoustics. Today his discography totals around 80 CD publications. Long term collaborations include ensembles KONK PACK, TOOT, THERMAL, FUTCH, MIMEO, SPEAK EASY, 6IX, VARIO-34, as well as duos with Marcus Schmickler, Tiziana Bertoncini, Gerry Hemingway, Paul Lovens, Frédéric Blondy Urs Leimgruber and John Butcher.
www.thomaslehn.com

RICHARD SCOTT - modular synthesizer
Richard Scott is a free improvising musician and electroacoustic composer working with electronics including modular synthesizers and controllers such as the Buchla Thunder and Lightning and his own self-designed WiGi infrared controller developed at STEIM. He has been composing and performing for over 25 years, recently working with Evan Parker, Jon Rose, Richard Barrett, Kazuhisa Uchihashi, Shelley Hirsch, Ute Wasserman, Michael Vorfeld, Frank Gratkowski and his own Lightning Ensemble. He studied free improvisation in the 1980s with John Stevens, saxophone with Elton Dean and Steve Lacy, and electroacoustic composition with David Berezan and Ricardo Climent. He has released many albums, for example with Grutronic and Evan Parker for PSI records, The Magnificence of Stereo (sruti BOX) and has a solo double modular synthesizer LP, Several Circles, and an album with Sidsel Endreson, Debris in Lower Earth Orbit, both due for release on CUSP Editions in 2015.
www.richard-scott.net

recorded live in concert on the 21st August 2014, at AUXXX in the Lichtblick Kino cellar, Berlin.

A new channel for original electroacoustic and experimental music

Bandcamp Daily  your guide to the world of Bandcamp